Recently a friend drove me to a medical appointment. As we left to return home she asked, “How about lunch?” This had not been in the plans but it was lunchtime and a nice suggestion so I said, “Sure.” The next question was what did we feel like having: a burger, a taco, pizza, Chinese? None of them moved either of us, so I offered another idea, “Further on there is a nice little French bakery that serves lunch, if you wouldn’t mind driving an extra bit.”

Within minutes both of us were savoring the richest flavored onion soup out of individual black wrought iron pots overflowing with melted cheese and boasting a gorgeous golden crusted crouton. Almost simultaneously, we both had the same thought: Why don’t I ever make this at home? Within days she made it for her family and the convent sisters served it for two different retreats. In each case it met with overwhelmingly positive responses.

How long has it been since you served French onion soup? 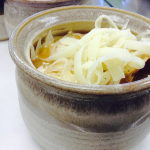 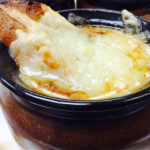